Back to a subject I’m starting to know all too well.  Feline diabetes has been something our household has been struggling with since mid-December of 2015.  I’ve heard it takes time to regulate and a couple times I almost thought we had it figured out. 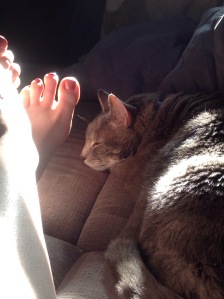 Once again, this disease has thrown me a curve ball and quite frankly, I’m not sure where that ball is going to land.  We faced good looking numbers, encountered a staggering peak after trying to get things back on track after a family vacation and now, things are really going down, down, down.

We went from our start-out dose of 2 units twice a day to just 1 unit once per day, then on down to 1/2 a unit in the morning two days in a row.  Over the past several days we haven’t been able to dose him at all due to numbers in the low 100’s and even this morning he registered at 84!

So, that leaves me wondering where we go from here?

Well, we will keep on doing what it is we’ve been doing since Milo’s diagnosis.  We will test daily to see where his blood sugar levels are at.  Tiresome?  Yes, especially for our sore eared pussy cat, but it’s the only way we will know what’s going on.

Eventually, I hope we can reduce the amount of poking and prodding our poor kitty must go through.  If he has truly stabilized or is in remission, without dosing insulin we probably could get by with testing once or twice per week.  While dosing, it’s always safest to keep a vigilant watch as even the smallest amount of insulin can send him plummeting.

His diet has been a key factor during this entire process.  I will continue to order the special diet cat food, Young Again Zero.  I believe this formula has really supported keeping his blood sugar levels down.  It took him a while to dig into it but when a big cat gets hungry enough…he will eventually cave in!  As always, we keep the pantry well stocked with other low-carb wet cat foods which have become a tantalizing part of our glucose checking routine.  Much to my husband’s dismay unfortunately, he can’t stand the smell of that stuff…haha!