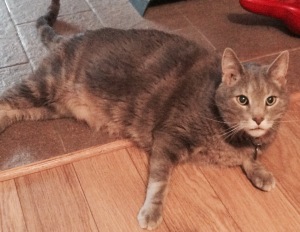 I am so happy to update you all on the progress of our diabetic kitty Milo.  It’s official, he has gone a full month without insulin and is officially deemed in-remission!  I can’t even begin to tell you how relieved I am to know that diet can actually reverse disease.  Duh, right?  But, now here’s the proof!  It took a bit of time but we made it through the ups and downs of sugar spikes.  For a while there, I was almost convinced he had a secret stash of high carb food we didn’t know about.

During the last 4 weeks without insulin Milo’s blood glucose numbers have ranged from a high of 148 to a low of 50.  On average, he stays within the 85-90 range consistently on the human blood sugar monitor (Contour Next).  According to the vet, human monitors can read 20-30 points lower than a pet’s actual blood sugar numbers.  Even with this range of error this puts Milo well within the 120-300 safe range or below the 150-200 kidney glucose threshold.

Diabetic cats considered in-remission can relapse, this holds an even higher certainty as the cat ages.  If you have a cat in a similar situation as Milo, it’s very important to continue with glucose monitoring and have insulin on hand (or a vet you can get it from).

From here, we will continue to keep him on his diet, Young Again Zero cat food and will proceed with checking his sugars twice per week instead of twice daily. I’m certain Milo will appreciate the break from our daily poking sessions!