I knew that day would come when I’d have to ‘thin the herd’ so to speak.  I had absolutely no intention of butchering ducks this morning but indeed, it did occur.  Long story short and I’ll spare you the details, I survived and two of my drakes did not. 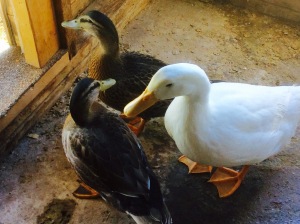 For the most part, all has been well with 4 males and 4 females.  The pecking order was established;  three of the boys grew up together and rarely did I have any problems.  That is until yesterday.

Our white Pekin duck (the Alpha) was showing signs of being picked on.  The back of his neck was showing some wear and his tail feathers were so severely plucked at he was bleeding.  It was as if he was being ganged up on in an unfair fight.

After separating him out and tending to his wound, I let him be by himself for the remainder of the day.  In the evening I decided to do a little experiment by placing them all together in the coop as I watched like a voyeur.  It was exactly as I had suspected, 1 male head to head with the Alpha while the two others plucked mercilessly at his tail.  That night, all the drakes stayed in the coop as usual but the two Rouen tail pluckers were enclosed in a dog crate.

As I awoke this morning I wondered how the white Pekin had fared.  With just one other male in the coop I knew at the very least, the fight would be fair.  Upon opening the coop to attend to morning chores all seemed well.  He wasn’t battered or bloody so I proceeded to let everyone free, including the two in the dog crate.  As luck would have it, the process started again, the Pekin was ganged up on.

I made quick work of separating all the males out of the flock and at that moment the decision was made for me.  I could no longer wait, it was time.

I took my time gathering the needed tools all while telling myself that I was a strong woman and I could do this.  I knew it was the right choice but that simple fact didn’t make it any easier.  Before proceeding I thanked the ducks, made my apologies, asked the Lord to make it quick and went on with the process.

Surprisingly enough, I didn’t shed tears.  I was solid as a rock.  Although I wasn’t certain of the exact procedure, Google helped me learn the basics.  I did it.

At that moment I became acutely aware of how quiet the farm had gotten as the rest of my birds knew something was out of the ordinary.  It was almost surreal and for a brief moment I felt like the stern father that says, “Now if you don’t behave, this will happen to you.”

In the end, I’m not sure if any of the birds know exactly what transpired.  They know enough to recognize something is missing but I can only hope they don’t understand the gruesome detail.

First and foremost thankful for the experience and strangely thankful I went through it without my husband’s or son’s assistance.  The white Pekin male still seems to have lost his Alpha status but perhaps that will change as he heals and as the newly smaller flock evolves.

2 Responses to “Duck For Dinner”