As temperatures keep falling and snow levels increase I find myself struggling to keep my coop ammonia levels at bay.  It’s not always possible to keep the walk-in door open and I had hoped between the roof vent and the chicken hatch the moisture would be under control.  Ventilation is key but obviously something was amiss with what I was currently doing.

Previous research warned against keeping water founts inside the coop in order to reduce added moisture to the floor litter.    However, my set up keeps water off the floor while allowing me to not water my birds outside.  Watering outside has resulted in massive ice buildups so it was no longer a feasible option for me.

The only other moisture source besides respiration was the introduction of fecal matter from the flock.  Early on I was cleaning my coop once a week and had no issues with smell.  Warmer temperatures also helped dry the litter adequately.

With a little more research I realized my ammonia issue was most likely my overuse of straw in my litter material.  Not only does it decompose (albeit slowly), it holds moisture and also supports the production of ammonia when mixed with chicken and duck poop.  I was setting my coop up to produce the very environment I didn’t want to have!

A good deep litter foundation starts with pine shavings.  I’m not just talking about a couple inches of the stuff, but a good 6-12 inches!  This material is slow to decompose and it is easy to fluff which allows it to dry quickly.

To start, I removed all the straw from my coop except for the duck bedding area.  This area I chose to keep the straw because I can clean and replace it as needed while retaining an insulated area for them to sleep.  The rest of the coop was shoveled out and dusted with a nice layer of diatomaceous earth and pine shavings.  Unfortunately, I didn’t have nearly enough shavings on hand for a proper base but it’s a start and it took care of my immediate ammonia issue. 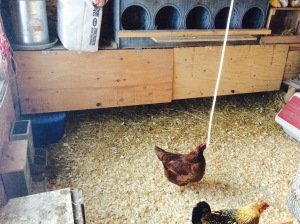 Under the roosting bars I wanted to create an area where poo could easily be removed instead of settling into the floor litter.  By adding a few flower pots and a couple boards I was able to make a flat surface that could be scraped into a bucket each morning.  There is room for improvement but with our cold temps I was trying to make it quick. 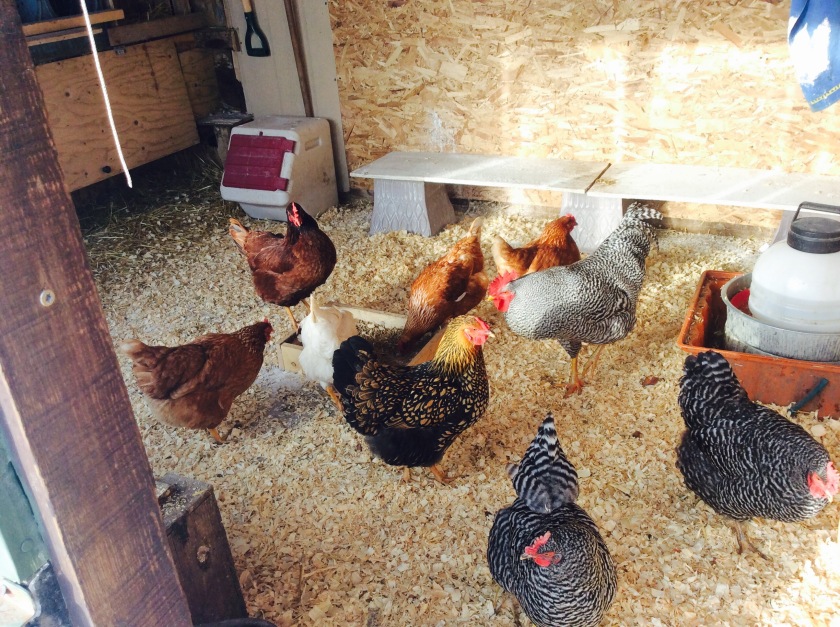 With these changes I’m hoping my coop air quality improves immensely.  I wasn’t too thrilled with many of the ammonia reducing products I found on the market.  Many of them must be mixed with water or they are in a liquid state which basically goes against everything I’ve been reading about reducing air humidity during the winter months.  Using vinegar would have been a good option but once again, the added moisture is my foe.

For now, I’ll just have to add pine shavings to my shopping list!