Once again, it has been a long, short season for our Farm to Market business, 25 Acres. We officially went full steam ahead this year and grew with the intent to sell what we harvest. In some respects, I grew far too much, while other items I grew far too little. How does that happen you ask? Let’s review.

Things like Cucumbers, Tomatoes and Sweet Corn are fresh foods everyone is clamoring for as the markets open.  The earlier you have them, the better.  I knew this, yet I think I underestimated the demand for various types of each.

Cucumbers, for instance, are either slicers or picklers.  However, picklers come in various sizes for anything from a gerkin pickle size to a sliced spear size and everything in between.  One person’s definition of a “pickler” might be different than the next. As a grower, the difference between a “pickler” and a fresh-eats slicer is the variety. And yes, some cucumber varieties are dual duty – which is what I grow.

Trying to supply what that particular demand is…is tricky business!  You pick too much of the small size, you jeopardize the supply of larger cucumbers to sell for fresh eats or larger spear pickles.   And, if they don’t sell, you are stuck with a ton of small picklers that you have to do something with.

The same holds true for tomatoes and their varieties.  From paste tomatoes to large juicy slicers for sandwiches, everyone has their favorite. I didn’t even contemplate growing heirloom varieties or cherry/grape tomatoes. I knew some would only purchase enough for that week’s meals, while others wanted to make a deal for greater quantities – I stuck to the basics.

Large amounts of tomatoes (10-12 pounds) sold cheaply.   If I marketed them for salsa making or canning, I would throw in a few Jalapeno Peppers to encourage their endeavors.  The key was selling larger volumes of market items for a low enough price it was attractive to the buyer and effective for me to make room for the next week’s harvest. If items didn’t sell at the market – I’d offer them in my online Facebook group, 25 Acre – Locally Grown Fresh Produce.

Sweet corn was slightly different to deal with.  As always, the early bird gets the worm and with corn, everyone is practically drooling as soon as they see it available.  We had 2 plantings, 2 weeks apart.  The first sold like hotcakes.  It was sweet, young and available before anyone else had theirs.  The second, was much more of a struggle to get rid of.  It literally came down to giving it away to friends because in that 2-3 week time period between plantings…EVERYONE had corn.

THE ‘NOT QUITE STAPLES’

The surprising thing about the items I now consider “Not Quite Staples” was based on an assumption that most people would like what I myself like.  Green Beans, Beets, Carrots, Zucchini, Green Cabbage, Summer Squash, Cantaloupe, Watermelon, Broccoli, Herbs, Apples, Okra, Potatoes, Colored Sweet Peppers & Green Peppers make up this list. 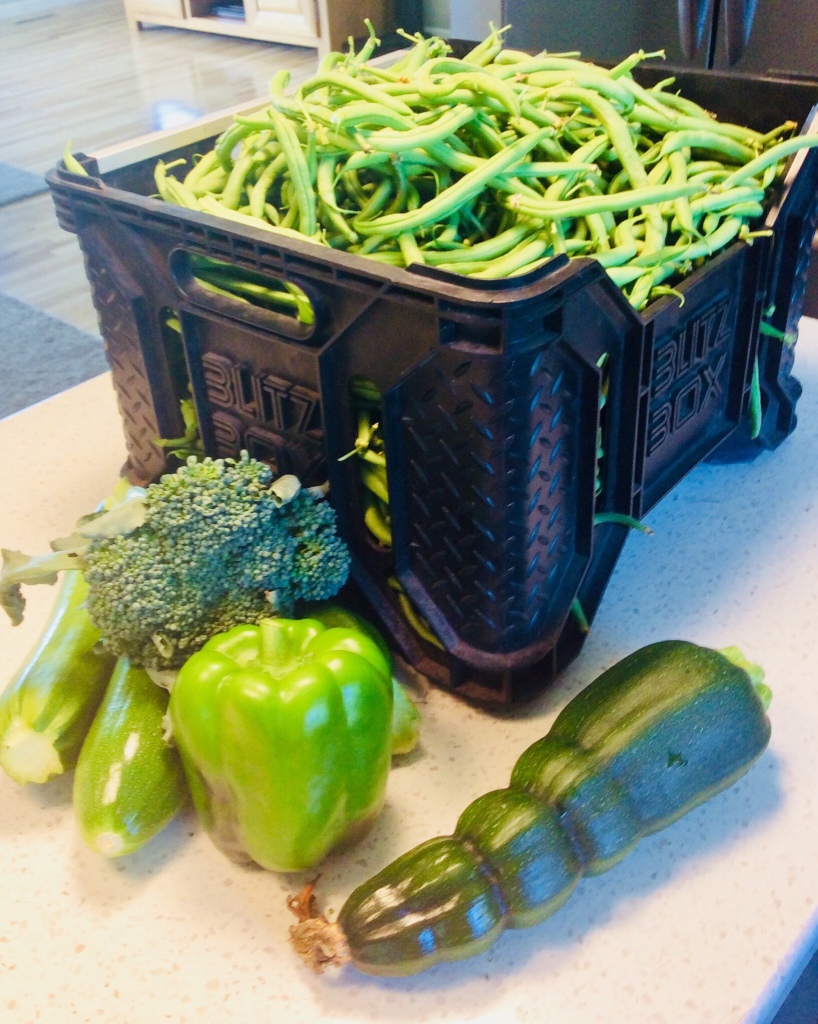 What was the most shocking miss?  Green Beans!  The optimist that I am, planted 7 rows of green beans.  For me, it is one of the most exciting lead-in vegetables I can get my hands on.  I love nothing more than a meal made entirely of freshly harvested and cooked green beans with a melted pat of delicious butter.  Unfortunately, this season, it appeared many others didn’t appreciate the humble bean as much as I did.

Hours harvesting, weighing, hauling to market, only to not have them sell was heartbreaking.  I blanched & froze, made Dilly Beans and practically gave away bag after bag of beautiful beans.

Other items such as beets, carrots, zucchini, cantaloupe and peppers did reasonably well at market.  I’d have a few leftovers here and there, but it seemed my plantings were enough to support the demand.  Sadly, the watermelon didn’t mature as well as I’d hoped and the broccoli came and went quickly. Potatoes, the reds sold, but russets didn’t.

Then, there were the items that people had no clue what to do with.  Summer squash, okra and fresh herbs were among what those in this area found to be a bit obscure in their use.  Herbs, most only use dry, not fresh.  I quickly realized they would not sell and reverted to dehydrating & storing for personal use.  Okra, what’s that?  And, as delicious as fried summer squash (yellow crooked neck) are, most thought they were solely decorative!

Many of these lesser staples I grow in limited amounts.  They are typically found and sold cheaply in grocery stores. I generally grow in amounts that can easily be processed and stored if they don’t sell at market.  They make great additions to my own food storage or as sellable processed products.

Leftovers can be a big issue when it comes to growing large amounts of fresh goods.  What you do with them as freshness quickly wains and as more produce is nearly ready for harvest is always at the back of my mind.  Short of giving them away, quick, cheap sales can work.  But, what about selling for an even greater profit?

Okra was perhaps my greatest win of the entire season.  Pickled Okra is one of those products that can literally be addiction inducing for those who take the chance and buy a jar.  As selling fresh okra wasn’t a big hit, I’d simply bring them home and process them into 25 Acre Tweaked Okra Pickles.  The result?  Far more income than I would have gotten by selling the product fresh.

I also sold Dilly Beans, Pickled Beets and Pickled Jalapenos in much the same manner.  What fresh didn’t sell, I put the extra work and effort into…and it ultimately paid off.  Towards the end of the season, customers would buy 3-4 jars to add to their pantry shelves. 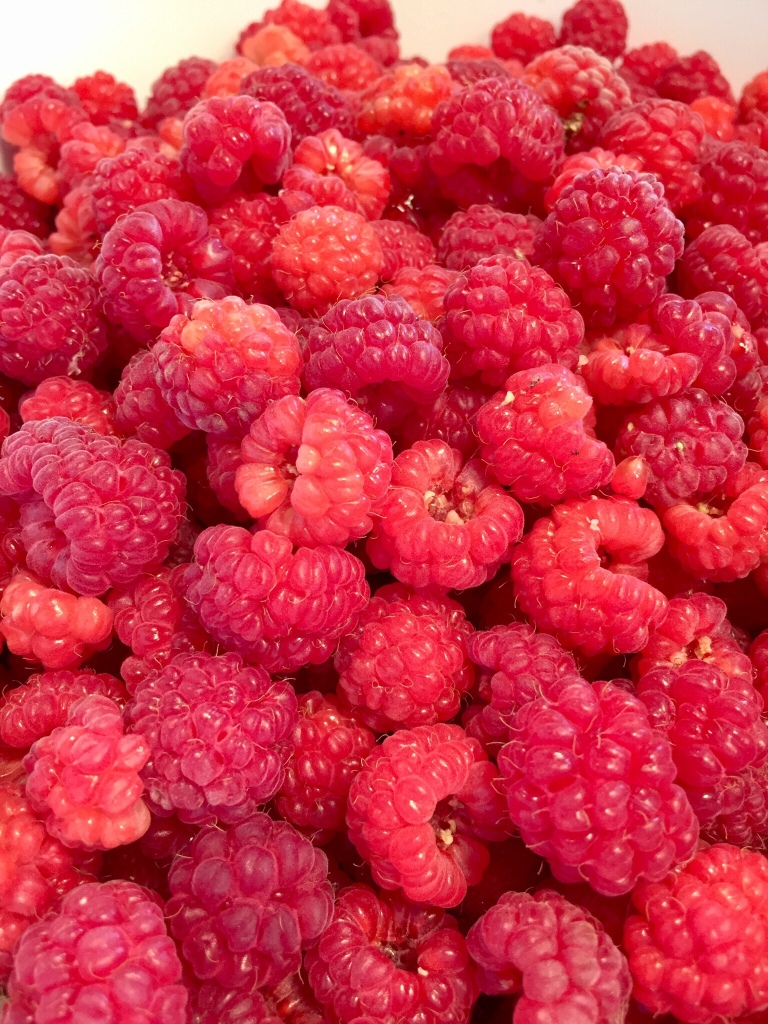 Some seasonal offerings are here…then gone quickly.  They generally come in limited amounts and most people will nab them up at market.  Raspberries were one such item for us this year.  They typically sold out when I had them available.  The delicate work of  the harvest and the timing of harvest was not lost on me.  As with anything we sold at market, freshness was important.  My freezer is currently well stocked with raspberries I knew wouldn’t make it to market day.  This winter will be a good time for me to process them into jam, wine or various experimental canned products.

Speaking of experimental, every year my husband and I like to try something new.  With this being our 3rd planting season here on the farm, we like to see what will grow best in our soil.  This year’s experimental list was a long one:

The largest hit of this entire list was the Honeydew Melon.  Word of mouth spread through the market like wildfire.  One fellow looking to try his first honeydew said, “…oh, let’s risk it.”  To which my reply was, “There is NO risk, these melons are delicious!”  Before you knew it, I had repeat customers purchasing 2 melons at a time.  They are definitely one product we WILL be growing again next year…and I will grow double the amount.

While the melon sold well, I became inundated with other produce and found myself trying to give away product.  One hill each of spaghetti squash and butternut squash yielded…no kidding…3 wheelbarrows full of each!  If we could survive on these two things alone, we could AND we could invite the entire neighborhood to dinner too!  Suffice it to say, next year’s planting will be revised.

Many of our experimentals were a joy to grow and consume in our own home.  My husband was always thrilled with artichokes for dinner.  Sweet potatoes, leeks, parsnips and kohlrabi have also contributed to some fabulous meals.  So fabulous in fact, next year’s garden will include heavier plantings to sell at market.  Kohlrabi for instance…is delicious when harvested small, peeled, cubed and pan roasted.

What I learn from growing our first-time, experimental produce is important.  I learn how to grow them, I recognize hurdles to overcome and I can personally determine how best to use and consume each item.  Or, in the case of the spaghetti squash and butternut squash, how best to store the over abundance.

I know now that growing cauliflower, eggplant or Brussel sprouts are just not my thing due to the enormous amount of pests we had to battle.  Between the flea beetles and the cabbage moths, it just wasn’t worth the work.  I’d say the same for kohlrabi but battling the pests on those plants were worth the awesome deliciousness of having it on my plate.  I just need to find a better way next year.

2018 was a great first year for 25 Acres.  The workload was crazy for only contributing to 1 Farmer’s Market and contemplating more leaves me fearing the exhaustion it would surely lead to.  While I know condensing the work and focusing on key types of produce may seem easier – I don’t think it is as attractive to buyers.

One thing that set 25 Acres apart, was the variety.  When you hear, “…I come to the market to see what new stuff you’ll have this week.  You always surprise me!”  Those are the things that make a business owner feel like they are doing something right, no matter the amount of work going into the process.