My parents will be the first to tell you that it’s not unusual for me to rescue anything that crawls, creeps, hops or flies – especially when it’s a helpless baby. When I was young I wanted to be a veterinarian and I have always had a natural affinity for animals. Now that I’m securely into adulthood, I’m not a vet but I love all animals.

Our first rescue, a pheasant named Peanut, was brought to us by a friend. Only a few days old, he grew to adulthood right along side a batch of chicken chicks I had hatched out. While his release came nearly a year after we got him, I knew it was overdue. With snow on the ground he didn’t have a chance to roam ‘wild’ until this past spring. 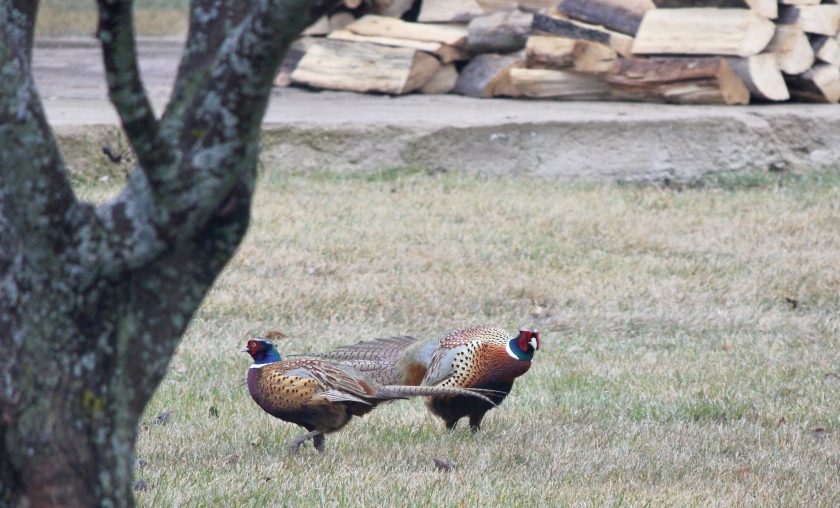 Spring brings with it warmer weather, abundant foraging and stormy weather. In Peanut’s case, he chose when he wanted to come and go. The coop provided food, water and shelter until he was comfortable leaving.

While Peanut found his way, storms and strong winds continue to make their way through North Dakota. Such was the case a few weeks ago when the dogs came across a storm fallen nest of baby birds.

Quite frankly, I was surprised any of them survived falling from our huge pine trees. At first I didn’t see this fuzzy little chick because I was more focused on the birds already being consumed as dog treats. My three dogs can be brutal hunters but Zwei (we named it) survived the fall and I knew I had to do something. 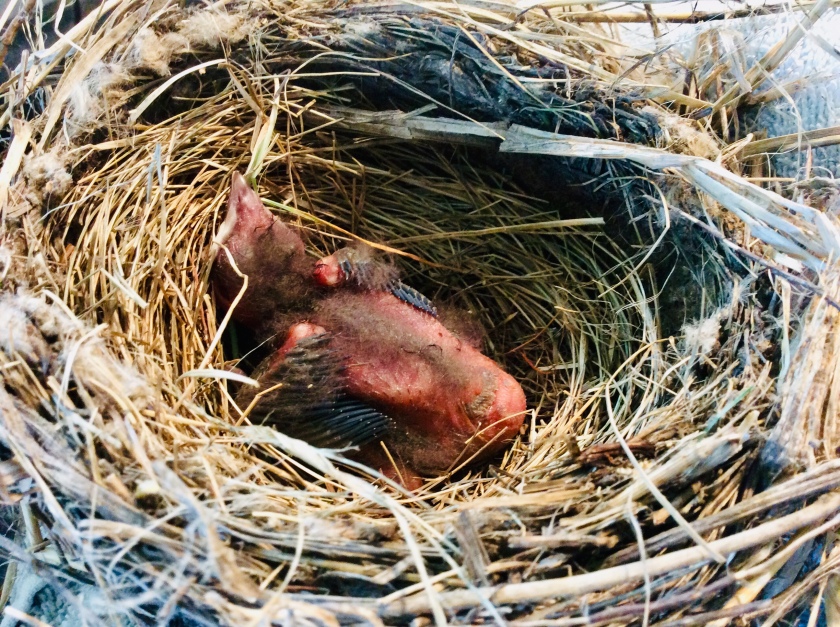 Scooping up Zwei and the scattered nest I brought the baby inside to do a little internet research. This was the ugliest little baby I ever did see but it deserved a fighting chance just like the rest of us.

After perusing the internet I was finally able to determine I was the official rescuer of a Grackle. Definitely abundant and not the most beloved bird in the world but it was part of my world none the less.

Providing heat with a seed starting mat I set Swei up in a cardboard box set securely inside a dog kennel. Next came food, pulling from the knowledge I have from raising my chickens. A mix of dry meal worm, dried oregano, dehydrated shrimp and chicken crumble mixed with water was the best I could offer.

Working with a pair of tweezers and a large syringe I was able to feed Zwei every half hour. Thankfully, birds don’t eat at night but this process still took a measure of dedication.

At the risk of appearing like a loon to my coworkers, Zwei went to work with me. While they may not admit it, everyone swooned over this ugly little bugger! With a gaping mouth and plenty of squawks, Zwei was a very dependent nestling.

Nearly two weeks after finding Zwei my parents traveled to North Dakota from Michigan for a visit. I’m sure they were a little shocked at all the chatter coming from my laundry room but my mom stepped in and fed the bird while I went to work. It’s a good thing she was getting the practice because a couple days later soaking rains brought down another nest! This time there were five – yes, I said FIVE – more babies needing help.

While these nestlings were nearly ready to leave their home, they still needed shelter from the cold and wet. For two days we continued to feed all six birds and quickly noticed the older of the newly found chicks were ready to leave. As luck would have it, their parents were watching when we had the kennel on the back porch for feeding time. Some of the adults even came with food in their beaks!

Three babies were released as we enjoyed watching the parents hover over them to feed. Zwei on the other hand, gladly stayed in the tree but still lacked the youth to be fussed over by bird parents or the skills to survive on her own. She stayed close and came to me for food and water.

So, we kept Zwei and the two weaker nestlings in the kennel at night. We continued to feed and teach perching skills to the young ones while letting Zwei out during the daytime where she could be watched away from the dogs.

Unfortunately, the two youngest nestlings didn’t make it but Zwei continues to bless us with her presence. By presence I mean, chatter, curiosity, need to feed and poop…LOTS of poop.

Recently I’ve been able to get her to feed a bit on her own. We’ve graduated to earth worms, grasshoppers, flies, fruit and the meal worm/chicken feed slurry. Bath time has become something she enjoys – I learned that the hard way when she found the dog water in the laundry room!

Because I’m still trying to get her acclimated to being a free bird, she takes frequent trips outside. One minute she’ll be in the top of an oak tree or the next she will be sunning herself on the back deck. Which, as you can imagine it is not a great idea for her to warm up on the deck if the dogs are around.

Zwei has even flown out to the lilac bushes behind the main garden. She happily watched me weed and chattered to let me know it was feeding time. When we took a break, she wandered the porch and sat at my feet chillin’ out. (Forgive the dirty feet…I worked in the garden that day!)

It’s a big world out there and I’m sure she’ll slowly distance herself as she gains more confidence. I’m guessing, because she was so tiny when I rescued her, I became mom. Zwei finds comfort with me, a good meal and she likes my singing (my husband will tell you “…that makes one of us”)

Until Zwei is ready to go, she’s got some pretty sweet digs. We’ve upgraded the kennel to something so she can enjoy the view and stay safe when the dogs need to come outside. When the dogs are in, she can come and go as she pleases once the door is opened. 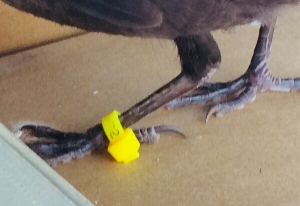 Zwei is German for the number 2. Zwei’s ankle tag has the number 002 on it as she is our second official bird rescue. I look forward to seeing her live on her own one day – just like Peanut, who we frequently hear call from our farm’s shelter belt.