This is our 4th summer raising chickens here on 25 Acres and in all that time we’ve only had a singular hen become broody. In fact, the nature of broodiness had always been a mystery to me until I really started thinking like a chicken…and a protective mamma.

Last fall we had a hen who refused to leave the nesting box. As excited as I was, I was still dismayed at the proximity of the nesting box to the floor being at least 2 feet away. That’s a long drop for a chick! Beyond that, it was a flock favorite box which meant fights would regularly break out amongst the girls. Not an ideal situation for a mom-to-be.

After trying to move the broody and her eggs to our newly built coop, the sitting session was over. The new environment basically ended up scaring the living daylights out of her and the broodiness went right along with it.

This spring I wanted to try something a little different, something that would encourage a hen’s natural broody behavior. I had to get the location right from the get-go, this meant a lower nesting box, adequate shelter, access to food/water, in a familiar location where a new mom and young chicks could be separated from the remaining flock if need be.

I decided the same “new” coop area and attached run would be the perfection option. By installing a floor level row of nesting boxes and adding shavings to only 1-2 boxes along with a pan of food and a small waterer, it was a chicken mamma’s shangrala.

All spring my flock was allowed access to this area. While hesitant at first, they quickly warmed up to the coop and started laying eggs in the 2 boxes I allowed. The first hurdle had been overcome!

TIP #2- Leave a stockpile of eggs 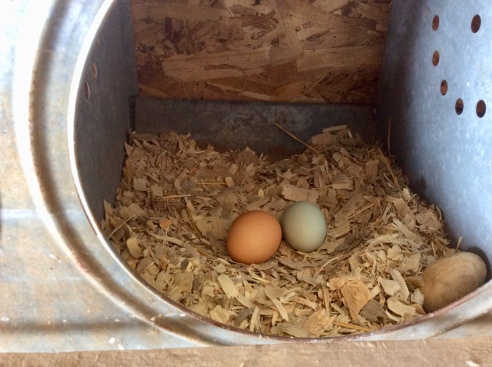 Once the hens were laying where I wanted them to, I further upped the ante by not collecting eggs in this area. My eating eggs were collected only from the original main coop. I frequently had to rotate out older eggs in the new enclosure, but the hens soon realized eggs were always there. The waste was minimal and the dogs had the pleasure of enjoying the discarded eggs.

By leaving eggs behind and creating a little stockpile, my hope was to let the girls dictate the number of eggs they’d be most apt to sit on. I could even slip in a couple desired breed eggs once the time came…IF it came. I did this for months.

Simply put – food and water are a necessity for life. As a hen becomes broody she will have likely bulked up because it will be rare for her to leave the nest. Departures, if any, will be few and brief. Having food and water close by that she doesn’t have to fight other chickens for makes the environment just that much more attractive.

By adding food and water to the new coop, it acted as an additional lure to curious hens. When chicks eventually show up on the scene, there will be no worries about them learning the art of feeding from their mother. Smaller chick-friendly feeders and waterers will be added later where special feed, supplements and medicines can easily be regulated.

TIP #4 – Cleanliness is next to Godliness

A clean coop is as attractive to me as it is to a hen wishing to become a new mother. Fresh pine shavings in the nesting box and scattered along the floor help make a great space to have babies.

This is the point where I really lucked out! While the newer coop has roosting bars, it is also used for storage of brooder boxes and so on. Our flock has never used this space to sleep at night – they have the original coop for that and they are comfortable with it. Because of this fact, the new coop stays free of poop buildup that commonly occurs at night.

Now that I am 4 months into the process…I’m seeing a glimmer of hope. Uno, my first ever incubated chick (2 summers ago) was caught sitting on the nest late one evening. If you recall, chickens generally roost high up at night so this was a drastic change for her.

Being cautious, I wasn’t certain if this behavior was due to having bumbles removed from both feet only days before. She could be sore, have further infection or in general just not feeling well. But, as luck would have it, I checked her feet and all appeared well.

On the second day I decided I wanted to keep her comfortable and stop the harassment from other hens vying to use that box. I closed her in the coop by herself at night to start the process.

I proceeded to block off all visitor access to the area. Since we designed our coops and runs side by side with doors in between, it was simple to keep her segregated. Uno would now have her own coop and dedicated run that she was familiar with. All while having the comfort of seeing her flock mates through the dividing fence.

Day 3, Uno was kept inside the coop completely. With good ventilation, food and water she had everything that was required.

By day 4 I noticed her pacing the door during my early morning rounds. While this worried me slightly I knew I couldn’t control every aspect of a hen becoming and staying broody. I opened her pen and allowed her to roam her half of the enclosure. After noticing a broken egg I promptly cleaned her box, added more pine shavings and let her do her thing. After a quick dust bath and some scratch, she was back on her eggs.

At this point in the game, it is safe to say she is officially broody and finding her own rhythm. With about 18 more days to go I’m hoping for the best. I’ve since slipped a couple more eggs under her and will likely continue to monitor egg viability. All in all, I’m pleased and I’m crossing my fingers we make it to hatch day!